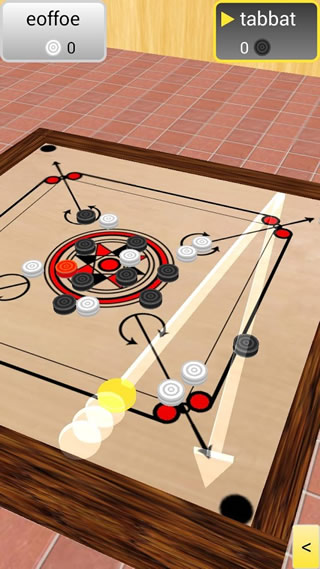 9Apps is your first choice to download apps. 6,160,000+ users downloaded Carrom 3D latest version on 9Apps for free every week! This is a wonderful app which is unique in android apps. This hot app was released on 2016-05-17. That’s it! You’re done?
Carrom 3D will give you the experience of playing with a real carrom board on your android phone and android tablet.
You can play with the automatic machine (with difficulty levels beginner, intermediate, or expert), or with a friend using the same phone or using another android phone/tablet as a network game through WIFI or Bluetooth.
For those who don't know carrom game, it is a strike and pocket game similar to billiards, pools, snooker and shuffleboard; Here in carrom (also known as karrom or carom) you will use the finger to shoot the pieces. (Reference: Wikipedia).
Controls are intuitive to any gamer. You will aim and shoot similar way you shoot in angry bird games. The game includes both a quick and a comprehensive tutorial to make you familiar with all the controls.