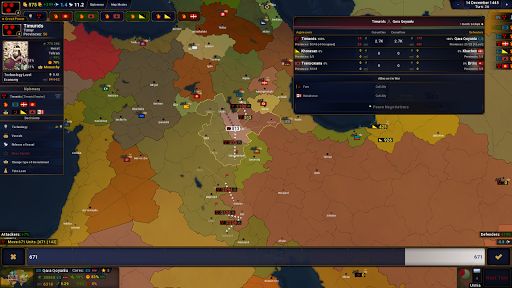 Description of Age of History II

Age of History II is a grand strategy wargame that is simple to learn yet hard to master.
Your objective is to use military tactics and cunning diplomacy to either unify the world, or conquer it.
Will the world bleed out or bow before you? The choice is yours..
Approach to the History
Age of History II goes through the whole history of humanity, Age by Age, beginning in the Age of Civilizations and leading into the far future
Historical Grand Campaign
Play as many Civilizations ranging from the largest empire to the smallest tribe, and lead your people to glory in a campaign spanning thousands of years from the dawn of civilization to the future of mankind
Main Features
Detailed map of the world with many historical borders
Deeper diplomatic system between Civilizations
Peace treaties
Revolutions
Create own History using in-game editors
Hotseat, play with as many players as Civilizations in scenario!
Terrain Types
More detailed diversity of Populations
End game timelapses
Create own world and play it!
Scenario Editor, create own historical or alternate history scenarios!
Civilization Creator
Flag maker
Wasteland Editor

New scenario: Victorian Era, 1836
New scenario: Ancient Greece
99% loading bug fix - If doesn't help game data/cache need to be cleared
Rewritten system of saves in game for more stability
New scenario: Napoleonic wars 1792
New: Minimum army to attack and capture any province must be over 10 units
It's possible to rotate the game in landscape mode
Modern World and WW2 scenario optimization! Now, AI makes its moves much faster!
Music is back! All 29 tracks!